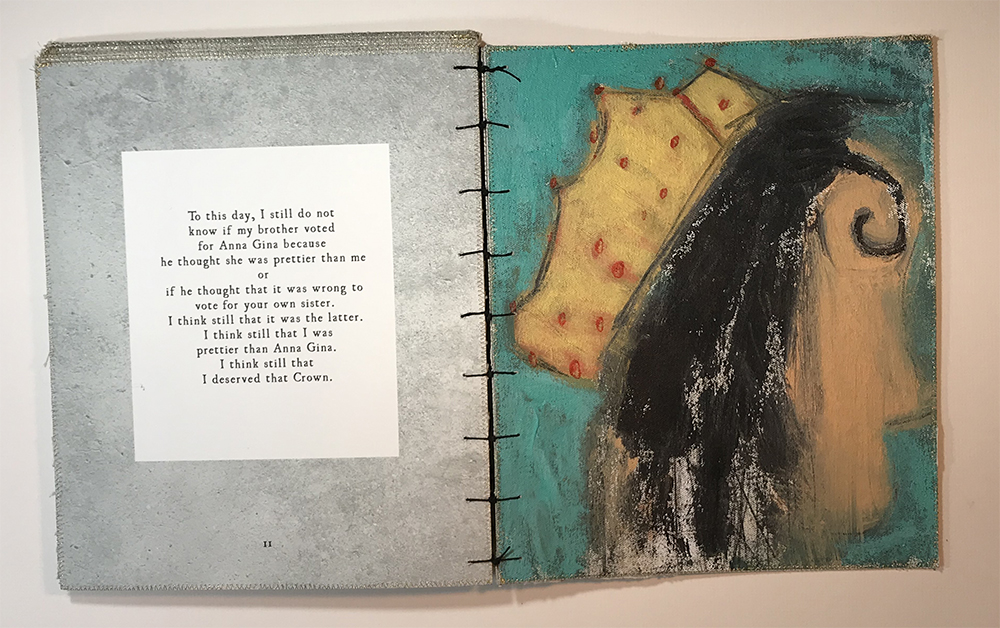 This is a one of a kind book hand bound by Val Sivilli. It contains a series of paintings with corresponding text. It is 10" x 12" and about 1" thick. It is acrylic on canvas, with text pages mounted onto the canvas. Each page is sewn. The book is chain stitched with Waxed Linen. Watch the story HERE: https://valsivilli.wordpress.com/2018/07/06/miss-logan-street/

Sometime in the early summer of 1964.

It seems as if the awareness of the memory resides in the mid-section of my abdomen, toward the left.

I was four.  It was Brooklyn. We had a very vital neighborhood. Filled with all kinds of kids and families and races. We did a lot of things on our block. We played stickball and ringalevio, we had concerts… we all would pretend to be the Beatles – well the boys pretended to be the Beatles and the girls, we stood up on milk-crates wearing miniskirts and danced like GOGO dancers.

Anna Gina was pretty  … but I I I IIII was prettier!

So I cried and screamed and carried on that I should have won and I was the real winner and I wanted to wear the sash. So, to shut me up, they put the sash on me – and the crown… THE CROWN!!!!  And I paraded up and down the block wearing the sash and the crown.

No one came out.  No one looked at me. No one else was on the street. It was just me. And I did not have any memory of caring that no one else was there. I was ‘Miss Logan Street’!  and I was the winner,  the princess , the queen !

I had no audience, and did not seem to care.